In this original study of witchcraft, Gibson explores the stories told by and about witches and their 'victims' through trial records, early news books, pamphlets and fascinating personal accounts. The author discusses the issues surrounding the interpretation of original historical sources and demonstrates that their representations of witchcraft are far from straight forward or reliable. Innovative and thought-provoking, this book sheds new light on early modern people's responses to witches and on the sometimes bizarre flexibility of the human imagination.

The Routledge History of Witchcraft is a comprehensive and interdisciplinary study of the belief in witches from antiquity to the present day, providing both an introduction to the subject of witchcraft and an overview of the on-going debates. This extensive collection covers the entire breadth of the history of witchcraft, from the witches of Ancient Greece and medieval demonology through to the victims of the witch hunts, and onwards to children’s books, horror films, and modern pagans. Drawing on the knowledge and expertise of an international team of authors, the book examines differing concepts of witchcraft that still exist in society and explains their historical, literary, religious, and anthropological origin and development, including the reflections and adaptions of this belief in art and popular culture. The volume is divided into four chronological parts, beginning with Antiquity and the Middle Ages in Part One, Early Modern witch hunts in Part Two, modern concepts of witchcraft in Part Three, and ending with an examination of witchcraft and the arts in Part Four. Each chapter offers a glimpse of a different version of the witch, introducing the reader to the diversity of witches that have existed in different contexts throughout history. Exploring a wealth of texts and case studies and offering a broad geographical scope for examining this fascinating subject, The Routledge History of Witchcraft is essential reading for students and academics interested in the history of witchcraft.

Bringing together leading historians, anthropologists, and religionists, this volume examines the unbridled passions of witchcraft from the Middle Ages to the present. Witchcraft is an intensely emotional crime, rooted in the belief that envy and spite can cause illness or even death. Witch-trials in turn are emotionally driven by the grief of alleged victims and by the fears of magistrates and demonologists. With examples ranging from Russia to New England, Germany to Cameroon, chapters cover the representation of emotional witches in demonology and art; the gendering of witchcraft as female envy or male rage; witchcraft as a form of bullying and witchcraft accusation as a form of therapy; love magic and demon-lovers; and the affective memorialization of the “Burning Times” among contemporary Pagan feminists. Wide-ranging and methodologically diverse, the book is appropriate for scholars of witchcraft, gender, and emotions; for graduate or undergraduate courses, and for the interested general reader.

For the people of early modern England, the dividing line between the natural and supernatural worlds was both negotiable and porous - particularly when it came to issues of authority. Without a precise separation between ’science’ and ’magic’ the realm of the supernatural was a contested one, that could be used both to bolster and challenge various forms of authority and the exercise of power in early modern England. In order to better understand these issues, this volume addresses a range of questions regarding the ways in which ideas, beliefs and constructions of the supernatural threatened and conflicted with authority, as well as how the power of the supernatural could be used by authorities (monarchical, religious, legal or familial) to reinforce established social norms. Drawing upon a range of historical, literary and dramatic texts the collection reveals intersecting early modern anxieties in relation to the supernatural, issues of control and the exercise of power at different levels of society, from the upper echelons of power at court to local and domestic spaces, and in a range of publication contexts - manuscript sources, printed prose texts and the early modern stage. Divided into three sections - ’Magic at Court’, ’Performance, Text and Language’ and ’Witchcraft, the Devil and the Body’ - the volume offers a broad cultural approach to the subject that reflects current research by a range of early modern scholars from the disciplines of history and literature. By bringing scholars into an interdisciplinary dialogue, the case studies presented here generate fresh insights within and between disciplines and different methodologies and approaches, which are mutually illuminating.

Demonology – the intellectual study of demons and their powers – contributed to the prosecution of thousands of witches. But how exactly did intellectual ideas relate to prosecutions? Recent scholarship has shown that some of the demonologists’ concerns remained at an abstract intellectual level, while some of the judges’ concerns reflected popular culture. This book brings demonology and witch-hunting back together, while placing both topics in their specific regional cultures. The book’s chapters, each written by a leading scholar, cover most regions of Europe, from Scandinavia and Britain through to Germany, France and Switzerland, and Italy and Spain. By focusing on various intellectual levels of demonology, from sophisticated demonological thought to the development of specific demonological ideas and ideas within the witch trial environment, the book offers a thorough examination of the relationship between demonology and witch-hunting. Demonology and Witch-Hunting in Early Modern Europe is essential reading for all students and researchers of the history of demonology, witch-hunting and early modern Europe.

Different conceptions of the world and of reality have made witchcraft possible in some societies and impossible in others. How did the people of Early Modern Europe experience it and what was its place in their culture? The essays in this collection illustrate trends in witchcraft research and in cultural history in general. After decades in which the social analysis of witchcraft accusations has dominated the subject, this study looks at its significance and meaning as a cultural phenomenon - to the languages of witchcraft, rather than its causes.

Between 1645-7, John Stearne led the most significant outbreak of witch-hunting in England. As accusations of witchcraft spread across East Anglia, Stearne and Matthew Hopkins were enlisted by villagers to identify and eradicate witches. After the trials finally subsided in 1648, Stearne wrote his only publication, A confirmation and discovery of witchcraft, but it had a limited readership. Consequently, Stearne and his work fell into obscurity until the 1800s, and were greatly overshadowed by Hopkins and his text. This book is the first study which analyses Stearne’s publication and contextualises his ideas within early modern intellectual cultures of religion, demonology, gender, science, and print in order to better understand the witch-finder’s beliefs and motives. The book argues that Stearne was a key player in the trials, that he was not a mainstream ‘puritan’, and that his witch-finding availed from contemporary science. It traces A confirmation’s reception history from 1648 to modern day and argues that the lack of research focusing on Stearne has resulted in misrepresentations of the witch-finder in the historiography of witchcraft. This book redresses the imbalance and seeks to provide an alternative reading of the East Anglian witch-hunt and of England’s premier witch-hunter, John Stearne. 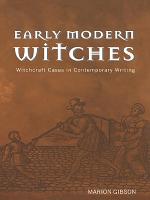 This collection of pamphlets describes fifteen English witchcraft cases in detail, vividly recreating events to give the reader the illusion of actually being present at witchcraft accusations, trials and hangings. But how much are we victims of literary manipulation by these texts? The pamphlets are presented in annotated format, to allow the reader to decide. Some of the texts appear in print for the first time in three centuries, whilst others are newly edited to give a clearer picture of sources.

By the end of the seventeenth century the most effective means of persuasion and communication was the pamphlet, which created influential moral and political communities of readers, and thus formed a 'public sphere' of popular, political opinion. This book is a unique history of the printed pamphlet in sixteenth- and seventeenth-century Britain and traces its rise as an imaginative and often eloquent literary form. Using a long-term perspective and a broad range of historical, bibliographical and textual evidence, the book sketches a complex definition of a 'pamphlet', showing the coherence of the literary form, the diversity of genres and imaginative devices employed by pamphleteers; and it explores readers' relationship with pamphlets and how both influenced politics. Individual chapters examine topics such as Elizabethan religious controversy, the book trade, the distribution of books and pamphlets, pamphleteering in the English Civil War, women and gender, and print in the Restoration.

Winner of the 2019 Warburg Prize from the Royal Swedish Academy of Letters, History and Antiquities for an outstanding work of literary history This is a study of the representation of witches in early modern English drama, organised around the themes of scepticism and belief. It covers the entire early modern period, including the Restoration, and pays particular attention to three plays in which witchcraft is central: The Witch of Edmonton (1621), The Late Lancashire Witches (1634) and The Lancashire Witches (1681). Always a controversial issue, witchcraft has traditionally been seen in terms of a debate between ‘sceptics’ and ‘believers’. This book argues instead that, while the concepts of scepticism and belief are central to an understanding of early modern witchcraft, they are more fruitfully understood not as static and mutually exclusive positions within the witchcraft debate, but as rhetorical tools used by both sides.

Rediscovering Renaissance Witchcraft is an exploration of witchcraft in the literature of Britain and America from the 16th and 17th centuries through to the present day. As well as the themes of history and literature (politics and war, genre and intertextuality), the book considers issues of national identity, gender and sexuality, race and empire, and more. The complex fascination with witchcraft through the ages is investigated, and the importance of witches in the real world and in fiction is analysed. The book begins with a chapter dedicated to the stories and records of witchcraft in the Renaissance and up until the English Civil War, such as the North Berwick witches and the work of the ‘Witch Finder Generall’ Matthew Hopkins. The significance of these accounts in shaping future literature is then presented through the examination of extracts from key texts, such as Shakespeare’s Macbeth and Middleton’s The Witch, among others. In the second half of the book, the focus shifts to a consideration of the Romantic rediscovery of Renaissance witchcraft in the eighteenth century, and its further reinvention and continued presence throughout the nineteenth, twentieth and twenty-first centuries, including the establishment of witchcraft studies as a subject in its own right, the impact of the First World War and end of the British Empire on witchcraft fiction, the legacy of the North Berwick, Hopkins and Salem witch trials, and the position of witchcraft in culture, including filmic and televisual culture, today. Equipped with an extensive list of primary and secondary sources, Rediscovering Renaissance Witchcraft is essential reading for all students of witchcraft in modern British and American culture and early modern history and literature.