Whereas most discussions of history have centered on the rift between China and Japan, this book focuses on three other divisions stemming from deep-seated memories within Northern Asia, which increasingly will test U.S. diplomacy and academic analysis. The first division involves long-suppressed Japanese and South Korean memories that are critical of U.S. behavior – concerning issues such as the atomic bombings, the Tokyo Tribunal, and the Korean War. The second division is the enduring disagreement between Japan and South Korea over history. What can the United States do to invigorate urgently needed trilateral ties? The third and most important division is the revival of a sinocentric worldview, which foretells a struggle between China and other countries concerning history, one that has already begun in China's dispute with South Korea and is likely to implicate the United States above all.

This original and detailed collection explores how regional actors deal with uncertainties that are inherent to the current geopolitical situation in East Asia. The contributors collectively demonstrate that strategic uncertainty has become a major factor in the shaping of the security order in East Asia.

The Code of Federal Regulations is a codification of the general and permanent rules published in the Federal Register by the Executive departments and agencies of the United States Federal Government.

American critics who deeply fear a "China threat" have unduly influenced government policy. "China hawks" believe China intends to push the United States out of Asia and dominate the world. Protectionists argue that China threatens American jobs and prosperity. This authoritative work examines why and how the U.S. should stabilize and improve its relations with China. It first assesses the threat posed by China, addressing such issues as military capability, Taiwan, the trade deficit, human rights and democracy. It then discusses the rationale for rapprochement between the two countries in order to achieve a stable peace. It makes the case for a fundamental shift in U.S. policy and efforts by both countries to increase their cooperation. It analyzes the benefits to the United States of this policy shift along with the potential impact on Japan, Taiwan, and both Koreas. This significant work on U.S.-China relations will be an essential resource for the academic and policy community as well as of interest to the general reader on a topic of great public concern.

What individuals and countries remember and what they forget, and why, tell much about their current values, perceptions, and even aspirations. In this volume international specialists and practitioners from Europe, Asia, and the United States illuminate through sometimes-conflicting interpretations the issues of "remembering and forgetting" that are shaping today's strategic alignments in East and Southeast Asia. The analysis covers how Japan, South and North Korea, China, Southeast Asian countries such as Indonesia and Malaysia, and the United States use memory and history to define their national sense of self and structure their international relations. 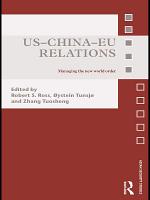 This volume brings together a group of leading international scholars to discuss how US-China-EU relations will shape the future of international politics.

America is fading, and China will soon be the dominant power in our region. What does this mean for Australia’s future? In this controversial and urgent essay, Hugh White shows that the contest between America and China is classic power politics of the harshest kind. He argues that we are heading for an unprecedented future, one without an English-speaking great and powerful friend to keep us secure and protect our interests. White sketches what the new Asia will look like, and how China could use its power. He also examines what has happened to the United States globally, under both Barack Obama and Donald Trump – a series of setbacks which Trump’s bluster on North Korea cannot disguise. White notes that we have got into the habit of seeing the world through Washington’s eyes, and argues that unless this changes, we will fail to navigate the biggest shift in Australia’s international circumstances since European settlement. The signs of failure are already clear, as we risk sliding straight from complacency to panic. ‘For almost a decade now, the world’s two most powerful countries have been competing. America has been trying to remain East Asia’s primary power, and China has been trying to replace it. How the contest will proceed – whether peacefully or violently, quickly or slowly – is still uncertain, but the most likely outcome is now becoming clear. America will lose, and China will win.’ —Hugh White, Without America ‘This important essay clarifies China’s brinkmanship in Asia and confronts the hard facts of what it means for Australia’ —Fiona Capp, The Sydney Morning Herald ‘In ... Without America: Australia in the New Asia, Hugh White has given us possibly his best piece of writing, and on a subject of the first importance.’ —Weekend Australian ‘Just when the foreign-policy orthodoxy seemed to be catching up with him, White [has] upend[ed] it again.’ —The Interpreter

Women Leaders of Africa, Asia, Middle East, and Pacific presents biographical sketches of hundreds of women leaders from earliest recorded history down to the present time. It is the first of two volumes giving data on women leaders from every continent and island in the world; the second volume deals with Europe and countries of the Western Hemisphere. Each book is divided into two sections. Part I of this volume deals with African women leaders; Part II with Asian, Middle East and Pacific women. Within each section, which is introduced by an essay overview, entries are arranged alphabetically. Suggestions for further reading on the subject appear at the end of each entry. Not all entries are merely recitations of facts. Some women's lives do not lend themselves to being reduced to statistics. Many were much too colorful, or lusty, or bloodthirsty to fit into a neat categorical description. How do you easily characterize the rule of the African queen who hacked her servant to death after she was through using him as a chair just to intimidate her new Portuguese overlord? Who kept as many as thirty slaves as sexual partners, supposedly killing them off when she had finished with them? How do you gloss over the actions of the newly enthroned Persian queen who ordered her stepbrother strangled, then had gold and silver coins struck bearing her new title: "Purity of the earthly world and of the faith"? How do you describe nicely the actions of the Chinese queen who chopped off her own hand to make a point to a man she had just condemned to death? How do you ascribe feminine traits to a grandmother who tried to kill her own grandson to keep him from succeeding her on the throne she herself had stolen? On the other hand, how do you do justice to the Queen of Tonga without mention of her commanding size six feet two inches or her forty-seven-year devotion to matters far beyond mere governance but of more importance to her subjects: like establishing handicraft outlets to market the wares of her people? Or to the Queen of Thailand who acted as Regent while the King, a devout Buddhist, performed his meditations and duties as a monk? She directed much more than affairs of state; her concern for the common people led her to promote the export of hand-woven Thai silk and to establish a chain of shops selling native crafts. She also organized the Thai Red Cross for aid to refugees, orphans, wounded soldiers, and flood victims. These and dozens of stories like them make African, Asian, Middle East, and Pacific Women Leaders a unique treasure that is hard to put down. Although most of the entries in this volume deal with women rulers, a portion of the book is devoted to women in leadership roles other than those of queen, empress, prime minister, or chieftainess. Of these additional entries, the majority deals with contemporary women judges, secretaries of state, cabinet members, or legislators of unusual influence and power.

China’s soft power has attracted considerable attention in the recent decade. In this volume scholars from the U.K., Europe, the U.S., Singapore, Australia, Hong Kong and mainland China, including a number of well established and well known analysts on China, examine main areas where China has made noticeable advances in its appeal and influence. They include China’s foreign policy discourse, international communication, cultural diplomacy, and foreign assistance. In addition, Chinese concept of soft power, foreign policy strategy, and the relationship between its international standing and that of the U.S. are also closely analysed. The volume covers some of the most recent development and assesses China’s soft power critically. This book offers an assessment of China’s efforts to cultivate its international image, as well as a critique of Nye’s theory of soft power. It draws on case studies of the Chinese diplomatic practice and utilizes world opinion polls. This volume offers a theoretical and empirical perspective on the discussion on soft power with a particular focus on China’s soft power. 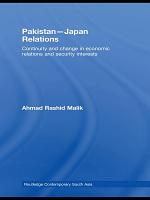 This is the first book-length study to explain the complex nature of Pakistan-Japan relations. It analyses the evolution and development of relations between the two countries by defining two key factors: economic interests and security concerns in the US-led global security system. Providing a thorough analysis of the history of relations between the countries, the important role Pakistan played in the context of peace and conflict resolution in East Asia during 1947-52, which helped ending the Occupation of Japan and restoring the country’s post-war economy, is highlighted. Pakistan then emerged as the largest trading partner of Japan only after the United States. It was Pakistan’s benevolent role that helped Japan to comeback to Asia in the 1950s as the author explains these events in greater detail that are not commonly known. In the 1960s and also in the 1980s during the Soviet occupation of Afghanistan, Pakistan emerged as one of the largest recipients of Japanese aid. The author explains that Japanese strategic aid to Pakistan was diverted to strengthen democratic values and institutions after the end of the Cold War. He then clarifies that Pakistan-Japan relations were dominated by two main issues during the 1990s, Japanese economic cooperation in Pakistan's trade liberalization, and suspicion about Pakistan's nuclear program. In conclusion, the author states that there has been a remarkable continuity in the area of economic relations, though there have been changes in security concerns. The book sets out future prospects for economic and diplomatic relations between the two countries, and it will be of interest to academics working in the field of International Relations, International Political Economy, and Asian Studies. For intellectuals, diplomats, and businessmen, the book would be a handy reference.