This sequel provides yet another dozen of today's most acclaimed writers and producers an open, uncensored forum in which they discuss everything from their work ethic to the political, social and economic issues affecting the television industry.

This sequel provides yet another dozen of today's most acclaimed writers and producers an open, uncensored forum in which they discuss everything from their work ethic to the political, social and economic issues affecting the television industry.

TV Outside the Box: Trailblazing in the Digital Television Revolution explores the new and exploding universe of on-demand, OTT (Over the Top) networks: Netflix, Amazon, Hulu, Crackle, CW Seed, Vimeo, AwesomenessTV, and many more. Featuring in-depth conversations with game-changing content creators, industry mavericks, and leading cultural influencers, TV Outside the Box is essential reading for anyone interested in the dynamics of a global media revolution – while it’s happening. Readers will discover: How the new "disruptors" of traditional television models are shaping the future of the television and feature film business. You’ll hear directly from the visionaries behind it all – from concept genesis to predictions for the future of streaming platforms; their strategies for acquisitions and development of new original content; and how the revolution is providing unprecedented opportunities for both established and emerging talent. What’s different about storytelling for the progressive, risk-taking networks who are delivering provocative, groundbreaking, binge-worthy content, without the restraints of the traditional, advertiser-supported programming model. Through interviews with the showrunners, content creators, and producers of dozens of trailblazing series – including Orange Is the New Black, House of Cards, Transparent, and many more – you’ll learn how and why the best and the brightest TV content creators and filmmakers are defining the new digital entertainment age – and how you can, too.

Over the past two decades, new technologies, changing viewer practices, and the proliferation of genres and channels has transformed American television. One of the most notable impacts of these shifts is the emergence of highly complex and elaborate forms of serial narrative, resulting in a robust period of formal experimentation and risky programming rarely seen in a medium that is typically viewed as formulaic and convention bound. Complex TV offers a sustained analysis of the poetics of television narrative, focusing on how storytelling has changed in recent years and how viewers make sense of these innovations. Through close analyses of key programs, including The Wire, Lost, Breaking Bad, The Sopranos, Veronica Mars, Curb Your Enthusiasm, and Mad Men the book traces the emergence of this narrative mode, focusing on issues such as viewer comprehension, transmedia storytelling, serial authorship, character change, and cultural evaluation. Developing a television-specific set of narrative theories, Complex TV argues that television is the most vital and important storytelling medium of our time. 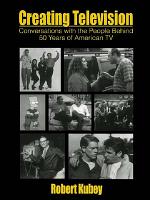 Creating Television brings television and its creators to life, presenting fascinating in-depth interviews with the creators of American TV. Having interviewed more than 100 television professionals over the course of his 15 years of research, Professor Robert Kubey presents here the 40 conversations that provide the most illuminating insights about the industry and the people working in it. These interviews bring television's creators to life, revealing their backgrounds, work, and thoughts about the audience and the television programs they create. Each interview tells a compelling tale of an individual's struggles and successes within a complex collaborative and highly commercial medium, offering readers rare insights on the human component in television's development. Featured in this volume are actors, agents, writers, directors, producers, and executives, representing television's earliest days through to the present day. Spanning shows from I Love Lucy and The Tonight Show through to Seinfeld, The Simpsons, and The Sopranos, these creators share the stories of how they gained entry to the industry and built their careers, offering readers a rare opportunity to meet, up close, the people involved in creating many of the most famous and successful programs in the medium's history, and linking the creators' personal histories to the television programs they create. With its unique insights on the people responsible for making television, this volume will be of interest to scholars and researchers in television history, sociology of culture, human creativity, television production, media studies, and mass media ethics. It will also be a popular reader for undergraduate and graduate students in courses addressing television, mass culture, media and society, American Studies, creativity, television history, and media ethics.

Gain a thorough understanding of the nuanced and multidimensional role producers play in television and new media today. Harness the creative, technical, interpersonal, and financial skills essential for success in this vibrant and challenging field. Producing for TV and New Media third edition is your guide to avoiding the obstacles and pitfalls commonly encountered by new and aspiring producers. New to this edition: * "Focus on New Media" sections that highlight emerging media, web video, and mobile/small format media * New sample production forms and contracts * New review questions accompanying each interview and chapter * All new interviews with industry professionals offer practical insight into cutting edge developments in television and new media production * Fresh analysis of new media technology * A revised and revamped companion website with all the sample forms and contracts in the book, updated web link resources, and much more Written especially for new and aspiring producers, with insight that simply cannot be found in any other books, this new edition is an indispensable guide for anyone looking to find success as a new media or TV producer.

Exploring early hits such as The Twilight Zone and Star Trek, as well as more recent successes such as Battlestar Galactica and Lost, The Essential Science Fiction Television Reader illuminates the history, narrative approaches, and themes of the genre. The book discusses science fiction television from its early years when shows attempted to recreate the allure of science fiction cinema, to its current status as a sophisticated genre with a popularity all its own. J. P. Telotte has assembled a wideranging volume rich in theoretical scholarship yet fully accessible to science fiction fans. The book supplies readers with valuable historical context, analyses of essential science fiction series, and an understanding of the key issues in science fiction television. 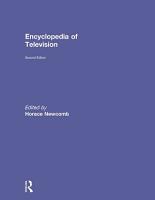 The Encyclopedia of Television, second edtion is the first major reference work to provide description, history, analysis, and information on more than 1100 subjects related to television in its international context. For a full list of entries, contributors, and more, visit the Encyclo pedia of Television, 2nd edition website.

Television and film have always been connected, but recent years have seen them overlapping, collaborating, and moving towards each other in ever more ways. Set amidst this moment of unprecedented synergy, this book examines how television and film culture interact in the 21st century. Both media appear side by side in many platforms or venues, stories and storytellers cross between them, they regularly have common owners, and they discuss each other constantly. Jonathan Gray and Derek Johnson examine what happens at these points of interaction, studying the imaginary borderlands between each medium, the boundary maintenance that quickly envelops much discussion of interaction, and ultimately what we allow or require television and film to be. Offering separate chapters on television exhibition at movie theaters, cinematic representations of television, television-to-film and film-to-television adaptations, and television producers crossing over to film, the book explores how each zone of interaction invokes fervid debate of the roles that producers, audiences, and critics want and need each medium to play. From Game of Thrones to The TV Set, Bewitched to the Marvel Cinematic Universe, hundreds of TV shows and films are discussed. Television Goes to the Movies will be of interest to students and scholars of television studies, film studies, media studies, popular culture, adaptation studies, production studies, and media industries.

This work indexes books, dissertations and journal articles that mention television shows. Memoirs, autobiographies, biographies, and some popular works meant for fans are also indexed. The major focus is on service to researchers in the history of television. Listings are keyed to an annotated bibliography. Appendices include a list of websites; an index of groups or classes of people on television; and a list of programs by genre. Changes from the second edition include more than 300 new shows, airing on a wider variety of networks; 2000-plus references (more than double the second edition); and a large increase in scholarly articles. The book provides access to materials on almost 2300 shows, including groundbreaking ones like All in the Family (almost 200 entries); cult favorites like Buffy: The Vampire Slayer (200-plus entries); and a classic franchise, Star Trek (more than 400 entries for all the shows). The shows covered range from the late 1940s to 2010 (The Walking Dead). References range from 1956 to 2013.

The history of prime-time television in the United States.

Return to Twin Peaks offers new critical considerations and approaches to the Twin Peaks series, as well as reflections on its significance and legacy. With texts that analyze the ways in which readers and viewers endow texts with meaning in light of historically situated and culturally shared emphases and interpretive strategies, this volume showcases the ways in which new theoretical paradigms can reinvigorate and enrich understanding of what Twin Peaks was and what it has become since it went off the air in 1991.

“On Story is film school in a box, a lifetime’s worth of filmmaking knowledge squeezed into half-hour packages.” —Kenneth Turan, film critic for the Los Angeles Times Austin Film Festival (AFF) is the first organization to focus on writers’ creative contributions to film and television. Its annual Film Festival and Conference offers screenings, panels, workshops, and roundtable discussions that help new writers and filmmakers connect with mentors and gain advice and insight from masters, as well as reinvigorate veterans with new ideas. To extend the Festival’s reach, AFF produces On Story, a television series currently airing on PBS-affiliated stations and streaming online that presents high-caliber artists talking candidly and provocatively about the art and craft of screenwriting and filmmaking, often using examples from their own work. On Story—The Golden Ages of Television explores the transformation of television’s narrative content over the past several decades through interviews with some of TV’s best creators and writers, including Garry Shandling (The Larry Sanders Show), Carl Reiner (The Dick Van Dyke Show), Issa Rae (Insecure), Vince Gilligan (Breaking Bad), Greg Daniels (The Office), Paula Pell (Saturday Night Live), Noah Hawley (Fargo), Liz Meriwether (New Girl), David Chase (The Sopranos), Alan Yang (Master of None), Marta Kauffman (Friends), Jenji Kohan (Orange Is the New Black), and many more. Their insights, behind-the-scenes looks at the creative process, production tales, responses to audiences’ reactions, and observations on how both TV narratives and the industry have changed make this book ideal for TV lovers, pop culture fans, students taking screenwriting courses, and filmmakers and writers seeking information and inspiration.

Israeli television, currently celebrating fifty years of broadcasting, has become one of the most important content sources on the international TV drama market, when serials such as Homeland, Hostages, Fauda, Zaguory Empire and In Treatment were bought by international networks, HBO included. Offering both a textual reading and discourse analysis of contemporary Israeli television dramas, Itay Harlap adopts a case study approach in order to address production, reception and technological developments in its accounts. His premise is that the meeting point between social trends within Israeli society (primarily the rise of opposition groups to the hegemony of the Zionist-Jewish-masculine-Ashkenazi ideologies) and major changes in the medium in Israel (which are comparable to international changes that have been titled "post-TV"), led to the creation of television dramas characterized by controversial themes and complex narratives, which present identities in ways never seen before on television or in other Israeli mediums.