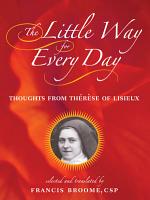 Saint Therese of Lisieux (1873-97, feast day, October 1) is the latest--and among youngest--of the thirty-three "Doctors of the Church." This devotional book is made up of her sayings from her many writings (Story of a Soul, her poetry, and her letters), approximately one to two sentences for each day of the year. Each month is introduced by a quote from Scripture (NRSV). The English text was translated by the late Paulist priest, Francis Broome, whose brief foreword is also included, as are end-notes and a table of contents. This is the perfect pocket-/purse-sized gift-book for those who have a devotion to St. Therese or to those who have yet to be introduced to her infectious "Little Way."

Saint Thérèse of Lisieux, also known as "The Little Flower of Jesus", lived her life by a doctrine The Little Way. Her writing shows a path to achieve holiness without performing feats or baptism of blood in the name of faith. Thérèse inspired millions to do good everyday by teaching us to embrace God in the small things. This diary contains her poems and will guide you on your "little way" day after day, week after week throughout a year.

From her early years, Thérèse of Lisieux desired to be a saint, so the primary focus of her life was to walk the path of love—what she called “the science of love.” But she often asked herself if her love was pure and authentic. With sensitivity and insight, author Joseph Schmidt shows us how Thérèse discovered certain qualities of the heart that told her that she was indeed walking the path of authentic love. These qualities—inner freedom, creativity, compassion, willingness, self-surrender or abandonment, and gratefulness—“opened her heart to a new depth of God’s life in and through her.” Eventually, they played a very practical role in Thérèse’s ordinary day-to-day life relationships—and they can in our own as well. As he did in his earlier book on Thérèse, Everything Is Grace, Joseph Schmidt breaks new ground in his latest book and offers tremendous food for thought and reflection on the spirituality of this great saint.

A perfect compendium for the Year of Saint Paul recently announced by Pope Benedict XVI, St. Paul the Apostle for Every Day is arranged into twelve thematic chapters, one for each month. From "Coming to Know God" to "The Hope of Resurrection," Fr. Kerrigan has arranged a type of "walk" with Saint Paul from his days as a persecutor of the incipient Christian faith, to his famous conversion, to his many travels and travails around the Mediterranean to his final imprisonment and execution in Rome. The book is also the perfect introduction to Saint Paul's thought and prose style, as well as his theology. Always spiritually charged, St. Paul brings the light of Christ that blinded him and shares it with us so that we, too, may see. 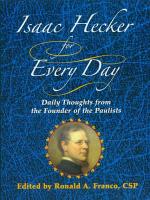 Introduces the thinking and spirituality of Isaac Thomas Hecker, founder of the Paulist Fathers, on a daily basis in the context of the calendar year. 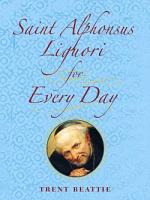 This devotional book is composed of 365 sayings from a great Doctor of the Church--"The Most Zealous Doctor"--Saint Alphonsus Liguori. 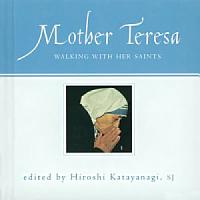 Focusing on different saints, this book features a quote from Mother Teresa, a scripture passage, and a photo that enhances them both.

The Little Way of Ruthie Leming follows Rod Dreher, a Philadelphia journalist, back to his hometown of St. Francisville, Louisiana (pop. 1,700) in the wake of his younger sister Ruthie's death. When she was diagnosed at age 40 with a virulent form of cancer in 2010, Dreher was moved by the way the community he had left behind rallied around his dying sister, a schoolteacher. He was also struck by the grace and courage with which his sister dealt with the disease that eventually took her life. In Louisiana for Ruthie's funeral in the fall of 2011, Dreher began to wonder whether the ordinary life Ruthie led in their country town was in fact a path of hidden grandeur, even spiritual greatness, concealed within the modest life of a mother and teacher. In order to explore this revelation, Dreher and his wife decided to leave Philadelphia, move home to help with family responsibilities and have their three children grow up amidst the rituals that had defined his family for five generations-Mardi Gras, L.S.U. football games, and deer hunting. As David Brooks poignantly described Dreher's journey homeward in a recent New York Times column, Dreher and his wife Julie "decided to accept the limitations of small-town life in exchange for the privilege of being part of a community."

The time-honored practices in this inspiring book will guide you in unlocking the power of Catholic devotions— prayers, meditations, and even very simple, small actions you can take right now that will bring you closer to God and also offer reassurance that we are never, ever alone. The mystical practices of mindfulness and heartfulness presented can help anyone find so­lace, healing, and direction during difficult times. In Life Everlasting readers will discover that lost causes can be won by meditating with St. Jude; healings can occur by praying with the Virgin Mary; and the Holy Spirit can assist us in making important decisions. The Catholic art of devotion can help us experience miracles in all aspects of our daily lives including our health, finances, and relationships. By praying and taking our attention off our own problems for just a few minutes a day, we can take the first steps toward abandoning fear and living a life of forgiveness, abundance, and perpetual gratitude. In other words, we can experience a little heaven on earth, a little life everlasting.

Life is hard and full of tremendous challenges. We can either go through it or we can grow through it. It’s time for you to claim your crown and find the best version of yourself, which is embedded deep within. You have what it takes. It won’t be easy, but through hard work, determination, faith in God, and great trust you can and will uncover the beauty from the ashes. You were made for greatness and must not settle for less. Today is the day for you to light that match and set your life ablaze. We all get our shot, so dig deep because you have limitless potential. It’s time to reignite your passion and zeal. If you want it bad enough, you will do whatever it takes. Go out there and unleash the beast. You have so much to live for. There is no time like the present moment. Now is the time to be fully alive! Feel and fuel the fire that burns within and blaze a new trail in order to live out your truth. Be the best version of yourself and hold nothing back. You were made to thrive! Come along and journey with me, it is time for you to reach your full potential. 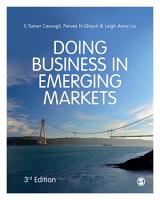 Fully updated to include coverage on the recent COVID-19 pandemic as well as other recent macro drivers, this third edition provides a comprehensive and authoritative examination of emerging markets across the globe.

St. Thérèse’s suffering as a nun, the bullying she experienced at school, and details of her tragic death from tuberculosis aged 24 are revealed in this groundbreaking book. You will read about her many miracles, including cures from cancer, arthritis and infertility. The Little Flower’s blueprint for a good and fulfilling life – her “little way” – is explained. Everybody is important, she said. Every little deed matters. Her philosophy is as relevant today as it ever was. This powerful and inspiring book gives you an intimate insight to one of Ireland’s favourite saints whose relics created a national sensation during their visit in 2001. Reviews “A great book,” RTE Radio 1 “Fascinating,” LMFM “A beautiful book,” Africa magazine “A compelling read,” The Connaught Telegraph “The Little Flower comes across as a very modern, millennial, feminist type of woman,” Brendan O’Connor, Sunday Independent