There is an evident need to see things more clearly, but without simplifying what was inherently a very complex war, which engulfed not only the United States and Vietnam, but their respective allies and other countries in Indochina, namely Laos and Cambodia. This task is undertaken by The A to Z Guide of the Vietnam War, first in its chronology, then in its introduction, but mainly in a substantial dictionary section including hundreds of entries on significant military and political persons, places, events, armed units, battles and lesser engagements, and weapons. Those seeking further information can then turn to the bibliography.

Vietnam became part of French Indochina in 1887 and did not regain its independence again until after the Vietnam War. However, despite a relatively peaceful two decades the country experienced little economic growth because of conservative leadership policies. In an effort to change this stagnation, Vietnamese authorities have committed to economic liberalization and enacted structural reforms needed to modernize the economy and to produce more competitive, export-driven industries. The A to Z of Vietnam focuses on the recent changes and leadership of Vietnam while giving due attention to the earlier kingdoms, the period of French Indochina, the wars for liberation, the Vietnam War, and much more. Hundreds of cross-referenced A to Z dictionary entries are included on political, economic, social and cultural aspects as well as the major cities and geographic features. This book also contains a chronology and introduction that traces Vietnam's history, as well as a bibliography.

Christian G. Appy explores how the Vietnam war was managed, reported, packaged, and consumed; the myths that were created; why decisions were made; who (if anyone) got left behind; America's accountability for atrocities and how the real 'Vietnam syndrome' has played out in popular culture and our foreign policy. He reports across newspaper accounts, TV coverage, Pentagon stats and position papers, memoirs, movies, novels, and more to create a completely fresh account of the meaning of the war, asking the hard questions.

Going beyond the dominant orthodox narrative to incorporate insight from revisionist scholarship on the Vietnam War, Michael G. Kort presents the case that the United States should have been able to win the war, and at a much lower cost than it suffered in defeat. Presenting a study that is both historiographic and a narrative history, Kort analyzes important factors such as the strong nationalist credentials and leadership qualities of South Vietnam's Ngo Dinh Diem; the flawed military strategy of 'graduated response' developed by Robert McNamara; and the real reasons South Vietnam collapsed in the face of a massive North Vietnamese invasion in 1975. Kort shows how the US commitment to defend South Vietnam was not a strategic error but a policy consistent with US security interests during the Cold War, and that there were potentially viable strategic approaches to the war that might have saved South Vietnam.

The very first issue of the classic and critically acclaimed 'Vietnam Journal' comic book series from war veteran Don Lomax. 'Vietnam Journal' shows the controversial war from the perspective of an embedded journalist. THIS ISSUE: "The Field Jacket" - A tattooed field jacket is supposedly a good luck charm for the wearers. Will the new reporter, who is there to cover the "in-field" troops be as lucky? His name is Scott Neithammer, but his friends and those around him just call him 'Journal'. See why Max Brooks (World War Z) said 'Vietnam Journal' was one of the 7 Best War Comics ever produced. A Caliber Comics release. 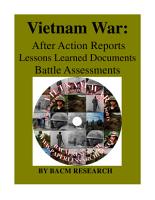 Vietnam became part of French Indochina in 1887 and did not regain its independence again until after the Vietnam War. However, despite a relatively peaceful two decades the country experienced little economic growth because of conservative leadership policies. In an effort to change this stagnation, Vietnamese authorities have committed to economic liberalization and enacted structural reforms needed to modernize the economy and to produce more competitive, export-driven industries. The third edition of this dictionary focuses on the recent changes and leadership of Vietnam while giving due attention to the earlier kingdoms, the period of French Indochina, the wars for liberation, the Vietnam War, and much more. Hundreds of cross-referenced A to Z dictionary entries are included on political, economic, social and cultural aspects as well as the major cities and geographic features. This book also contains a chronology and introduction that traces Vietnam's history, as well as a bibliography.

"The most divisive war in modern US history escalated without ever even being declared. In August of 1964, Congress ceded its authority to declare war by passing the Gulf of Tonkin Resolution. A Comprehensive Film Guide to Motion Pictures and Television that pertain to the War in Vietnam. Through the eyes of Hollywood, some insight, facts and stories about this lost conflict. The Vietnam War is every American's story. A to Z Film Guide."--Back cover.

Covering the thirty years between 1945 and 1975, In Country: The Illustrated Encyclopedia of the Vietnam War is a balanced, comprehensive "A to Z" encyclopedia on the conflict that includes definitive coverage of all aspects of the war--both on the home front and "in country."

Are you interested in wars? Want to learn about them from an insider's perspective? In first-person narration, this book will take you on intense adventures. This book is a series of vignettes about the Vietnam War by a corpsman (medic). You will find few accounts of heroic exploits here. This is not the memoir of a decorated hero but rather a frank disclosure of one who held on by a thread.

The Vietnam War remains a topic of extraordinary interest, not least because of striking parallels between that conflict and more recent fighting in the Middle East. In The Vietnam War, Mark Atwood Lawrence draws upon the latest research in archives around the world to offer readers a superb account of a key moment in U.S. as well as global history. While focusing on American involvement between 1965 and 1975, Lawrence offers an unprecedentedly complete picture of all sides of the war, notably by examining the motives that drove the Vietnamese communists and their foreign allies. Moreover, the book carefully considers both the long- and short-term origins of the war. Lawrence examines the rise of Vietnamese communism in the early twentieth century and reveals how Cold War anxieties of the 1940s and 1950s set the United States on the road to intervention. Of course, the heart of the book covers the "American war," ranging from the overthrow of South Vietnamese President Ngo Dinh Diem to the impact of the Tet Offensive on American public opinion, Lyndon Johnson's withdrawal from the 1968 presidential race, Richard Nixon's expansion of the war into Cambodia and Laos, and the problematic peace agreement of 1973, which ended American military involvement. Finally, the book explores the complex aftermath of the war--its enduring legacy in American books, film, and political debate, as well as Vietnam's struggles with severe social and economic problems. A compact and authoritative primer on an intensely relevant topic, this well-researched and engaging volume offers an invaluable overview of the Vietnam War.

“An incredibly powerful account of a little-known chapter in the Vietnam War saga” written by a CIA veteran who fought in the Secret War (Booklist, starred review). In the 1960s and ’70s, the Laotian Civil War became a covert theater for the conflict in Vietnam, with the US paramilitary backing the Royal Lao government in what came to be known among the CIA as the Secret War. In late 1971, the North Vietnamese Army launched Campaign Z, invading northern Laos on a mission to defeat the Royal Lao Army. General Giap had specifically ordered the NVA troops to kill the CIA army and occupy its field headquarters in the Long Tieng valley. The NVA faced the small rag-tag army of Vang Pao, mostly Thai irregulars recruited to fight for the CIA. But thousands more were quickly recruited, trained, and rushed into position in Laos to defend against the impending NVA invasion. Despite overwhelming odds in the NVA’s favor, the battle raged for more than one hundred days—the longest battle in the Vietnam War. In the end, it all came down to Skyline Ridge. Whoever won Skyline, won Laos. Historian James E. Parker Jr. served as a CIA paramilitary officer in Laos. In this authoritative and personal account, Parker draws from his own firsthand experience as well as extensive research into CIA files and North Vietnamese after-action reports in order to tell the full story of the battle of Skyline Ridge.

Vietnam Diary, first published in 1963, is veteran war correspondent Richard Tregaskis' eyewitness account of the early period of the Vietnam War. The Diary is filled with personal stories of some of the 14,000 U.S. troops in Vietnam at the time-some heroic, some tragic, but all moving. Missions of the U.S. Marines, U.S. Army , and Special Forces are detailed, as is the larger picture of American advisors leading Vietnamese troops into battle against the Viet Cong and North Vietnamese Army. Illustrated throughout with b/w photographs.