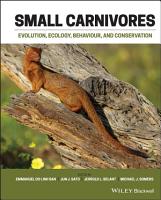 This book aims at filling a gap in the scientific literature by showing the important roles of, and some of the latest knowledge acquired on, the world's small carnivores. Small Carnivores brings together contributions dealing with several aspects of small carnivore evolution, ecology, behavior, and conservation biology. While several recent books have focused on restricted taxa of small carnivores, this volume deals with a wide range of species belonging to numerous families. The species of interest predominantly include badgers, martens, otters and allies (Mustelidae), civets, genets and allies (Viverridae), mongooses (Herpestidae), raccoons (Procyonidae), and skunks (Mephitidae). This book contains a series of reviews dealing with systematics, biogeography, ecomorphology, ecology and conservation issues. The book also contains original research papers bringing new insights into a wide range of disciplines, including morphological studies, movement ecology, disease dynamics, and interspecific interactions.

This book is a selection of essays that aim to provide "snap shots" which explore aspects on how these creatures live in human-dominated landscapes.

This book presents a critical review and summary of the problems, solutions and future directions for carnivore conservation. 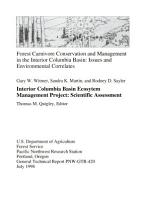 Forest carnivores in the Pacific Northwest include 11 medium to large-sized mammalian species of canids, felids, mustelids, and ursids. These carnivores have widely differing status in the region, with some harvested in regulated furbearer seasons, some taken for depredations, and some protected because of rarity. Most large carnivores have declined in numbers or range from human encroachment, loss or modification of forest habitat, accidental deaths (e.g., mortality from vehicles), illegal kills, and our inability to adequately monitor and protect populations. Efforts to reverse these trends include new approaches to reduce conflicts with humans, research to better define habitat needs, formation of expert carnivore working groups, and use of Geographic Information System models to predict specific impacts of habitat modifications. Long-term preservation of large carnivores in the region is problematic unless we reduce forest fragmentation and conflicts with humans and improve our ability to quantitatively integrate population dynamics with landscape level habitat requirements. 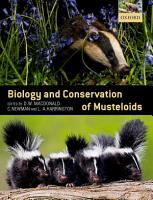 The musteloids are the most diverse super-family among carnivores, ranging from little known, exotic, and highly-endangered species to the popular and familiar, and include a large number of introduced invasives. They feature terrestrial, fossorial, arboreal, and aquatic members, ranging from tenacious predators to frugivorous omnivores, span weights from a 100g weasel to 30kg giant otters, and express a range of social behaviours from the highly gregarious to the fiercely solitary. Musteloids are the subjects of extensive cutting-edge research from phylogenetics to the evolution of sociality and through to the practical implications of disease epidemiology, introduced species management, and climate change. Their diversity and extensive biogeography inform a wide spectrum of ecological theory and conservation practice. The editors of this book have used their combined 90 years of experience working on the behaviour and ecology of wild musteloids to draw together a unique network of the world's most successful and knowledgeable experts. The book begins with nine review chapters covering hot topics in musteloid biology including evolution, disease, social communication, and management. These are followed by twenty extensive case studies providing a range of comprehensive geographic and taxonomic coverage. The final chapter synthesises what has been discussed in the book, and reflects on the different and diverse conservation needs of musteloids and the wealth of conservation lessons they offer. Biology and Conservation of Musteloids provides a conceptual framework for future research and applied conservation management that is suitable for graduate level students as well as professional researchers in musteloid and carnivore ecology and conservation biology. It will also be of relevance and use to conservationists and wildlife managers.

Strategies for protecting wolves, mountain lions, and more—by taking the human species into account as well: “Very valuable.”—Journal of Wildlife Management Drawing on six case studies of wolf, grizzly bear, and mountain lion conservation in habitats stretching from the Yukon to Arizona, Large Carnivore Conservation argues that conserving and coexisting with large carnivores is as much a problem of people and governance—of reconciling diverse and sometimes conflicting values, perspectives, and organizations, and of effective decision making in the public sphere—as it is a problem of animal ecology and behavior. By adopting an integrative approach, editors Susan G. Clark and Murray B. Rutherford seek to examine and understand the interrelated development of conservation science, law, and policy, as well as how these forces play out in courts, other public institutions, and the field. In combining real-world examples with discussions of conservation and policy theory, Large Carnivore Conservation not only explains how traditional management approaches have failed to meet the needs of all parties, but also highlights examples of innovative, successful strategies and provides practical recommendations for improving future conservation efforts. “Building on decades of work, this book integrates biological knowledge with human dimensions study and charts a course for coexistence with large carnivores.”—Douglas W. Smith, Senior Wildlife Biologist, Yellowstone National Park

Large carnivores include iconic species such as bears, wolves and big cats. Their habitats are increasingly being shared with humans, and there is a growing number of examples of human-carnivore coexistence as well as conflict. Next to population dynamics of large carnivores, there are considerable attitude shifts towards these species worldwide with multiple implications. This book argues and demonstrates why human dimensions of relationships to large carnivores are crucial for their successful conservation and management. It provides an overview of theoretical and methodological perspectives, heterogeneity in stakeholder perceptions and behaviour as well as developments in decision making, stakeholder involvement, policy and governance informed by human dimensions of large carnivore conservation and management. The scope is international, with detailed examples and case studies from Europe, North and South America, Central and South Asia, as well as debates of the challenges faced by urbanization, agricultural expansion, national parks and protected areas. The main species covered include bears, wolves, lynx, and leopards. The book provides a novel perspective for advanced students, researchers and professionals in ecology and conservation, wildlife management, human-wildlife interactions, environmental education and environmental social science.

Martens and Fishers (Martes) in Human-Altered Environments: An International Perspective examines the conditions where humans and martens are compatible and incompatible, and promotes land use practices that allow Martes to be representatively distributed and viable. All Martes have been documented to use forested habitats and 6 species (excluding the stone marten) are generally considered to require complex mid- to late-successional forests throughout much of their geographic ranges. All species in the genus require complex horizontal and vertical structure to provide escape cover protection from predators, habitat for their prey, access to food resources, and protection from the elements. Martens and the fisher have high metabolic rates, have large spatial requirements, have high surface area to volume ratios for animals that often inhabit high latitudes, and often require among the largest home range areas per unit body weight of any group of mammals. Resulting from these unique life history characteristics, this genus is particularly sensitive to human influences on their habitats, including habitat loss, stand-scale simplification of forest structure via some forms of logging, and landscape-scale effects of habitat fragmentation. Given their strong associations with structural complexity in forests, martens and the fisher are often considered as useful barometers of forest health and have been used as ecological indicators, flagship, and umbrella species in different parts of the world. Thus, efforts to successfully conserve and manage martens and fishers are associated with the ecological fates of other forest dependent species and can greatly influence ecosystem integrity within forests that are increasingly shared among wildlife and humans. We have made great strides in our fundamental understanding of how animals with these unique life history traits perceive and utilize habitats, respond to habitat change, and how their populations function and perform under different forms of human management and mismanagement. This knowledge enhances our basic understanding of all species of Martes and will help us to achieve the goal of conserving viable populations and representative distributions of the world’s Martes, their habitats, and associated ecological communities in our new millennium.

Animals that must hunt and kill for at least part of their living are inherently interesting to many people and the role that carnivores play in biological communities attract interest from ecologists and conservation biologists. Conflicts with human activities stimulate continual debates about the management of carnivore populations, and throughout the world people seek workable solutions for human/carnivore coexistence. This concise yet authoritative handbook describes research methods and techniques for the study and conservation of all terrestrial carnivore species. Particular attention is paid to techniques for managing the human/carnivore interface. Descriptions of the latest methodologies are supported by references to case studies, whilst dedicated boxes are used to illustrate how a technique is applied to a specific land cover type, species, or particular socio-economic context. The book describes the most recent advances in modelling the patterns of animal distributions, movements, and use of land cover types, as well as including the most efficient methods to trap, handle, and mark carnivores. Carnivores are biogeographically diverse and whilst extensive scientific research has investigated many aspects of carnivore biology, not all species have been equally covered. This book is unique in its intention to provide practical guidance for carrying out research and conservation of carnivores across all species and areas of the world.

In this book, the authors present current research in the conservation, species and management of carnivores. Topics discussed include the adaptation, impact and management of the raccoon dog in Europe; human perceptions of cougars in Canada and El Salvador; the impact on wildlife conservation of emerging protozoal tick-borne diseases of canids; mitigating conflict between humans and large carnivores in carnivore conservation; the management and conservation of wolves in the Iberian Peninsula; and factors affecting small and middle-sized carnivore occurrence and abundance in Mediterranean agricultural landscapes in Southern Portugal. 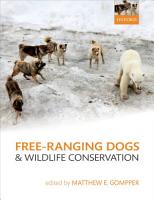 Dogs are the world's most common and widespread carnivores and are nearly ubiquitous across the globe. The vast majority of these dogs, whether owned or un-owned, pure-bred or stray, spend a large portion of their life as unconfined, free-roaming animals, persisting at the interface of human and wildlife communities. Their numbers are particularly large throughout the developing world, where veterinary care and population control are often minimal and human populations are burgeoning. This volume brings together the world's experts to provide a comprehensive, unifying, and accessible review of the effects of dogs on native wildlife species. With an emphasis on addressing how free-ranging dogs may influence wildlife management and native species of conservation concern, chapters address themes such as the global history and size of dog populations, dogs as predators, competitors, and prey of wildlife, the use of dogs as hunting companions, the role of dogs in maintaining diseases of wildlife, and the potential for dogs to hybridize with wild canid species. In addition, the potential role of dogs as mediators of conservation conflict is assessed, including the role of dogs as livestock guardians, the potential for dogs to aid researchers in locating rare wildlife species of conservation interest, and the importance of recognizing that some populations of dogs such as dingoes have a long history of genetic isolation and are themselves important conservation concerns. A common theme woven throughout this volume is the potential for dogs to mediate how humans interact with wildlife and the recognition that the success of wildlife conservation and management efforts are often underpinned by understanding and addressing the potential roles of free-ranging dogs in diverse natural ecosystems. Free-Ranging Dogs and Wildlife Conservation is aimed at professional wildlife and conservation ecologists, managers, graduate students, and researchers with an interest in human-dog-wildlife interactions. It will also be of relevance and use to dog welfare researchers, veterinary scientists, disease ecologists, and readers with an interest in the interface of domestic animals and wildlife.