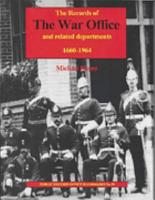 This guide covers the period from the Restoration of Charles II to the establishment of the Ministry of Defence in 1964. It includes the records of the Board of Ordnance, military intelligence and military aviation.

The study of eighteenth century history has been transformed by the writings of John Brewer, and most recently, with The Sinews of Power, he challenged the central concepts of British history. Brewer argues that the power of the British state increased dramatically when it was forced to pay the costs of war in defence of her growing empire. In An Imperial State at War, edited by Lawrence Stone (himself no stranger to controversy), the leading historians of the eighteenth century put the Brewer thesis under the spotlight. Like the Sinews of Power itself, this is a major advance in the study of Britain's first empire.

Standing armies and navies brought with them military medical establishments, shifting the focus of disease management from individuals to groups. Prevention, discipline, and surveillance produced results, and career opportunities for physicians and surgeons. All these developments had an impact on medicine and society, and were in turn influenced by them. The essays within examine these phenomena, exploring the imperial context, nursing and medicine in Britain, naval medicine, as well as the relationship between medicine, the state and society. British Military and Naval Medicine challenges the notion that military medicine was, in all respects, ‘a good thing’. The so-called monopoly of military medicine and the authoritarian structures within the military were complex and, at times, successfully contested. Sometimes changes were imposed that cannot be characterised as improvements. British Military and Naval Medicine also points to opportunities for further research in this exciting field of study.

The modern concept of disability did not exist in the Romantic period. This study addresses the anachronistic use of 'disability' in scholarship of the Romantic era, providing a disability studies theorized account that explores the relationship between ideas of function and aesthetics. Unpacking the politics of ability, the book reveals the centrality of capacity and weakness concepts to the egalitarian politics of the 1790s, and the importance of desert theory to debates about sentiment and the charitable relief of impaired soldiers. Clarifying the aesthetics of deformity as distinct from discussions of ability, Joshua uncovers a controversy over the use of deformity in picturesque aesthetics, offers accounts of deformity that anticipate recent disability studies theory, and discusses deformity and monstrosity as a blended category in Frankenstein. Setting aside the modern concept of disability, Joshua cogently argues for the historical and critical value of period-specific terms.

Inferior Politics explores how social policy was created in Britain in a period when central government was not active in making it. Despite the lack of consensus, there was a lively and inclusive 'politics' of social policy-making, in which 'inferior' officers of government (what we might call 'local authorities') figured prominently.

The Military Covenant states that in exchange for their military service and their willingness to make the ultimate sacrifice, soldiers should receive the nation’s support. Exploring the concept’s invention by the Army in the late 1990s, its migration to the civilian sphere from 2006 and its subsequent entrenchment in public policy, Ingham seeks to understand the Covenant’s progress from the esoteric confines of Army doctrine to national recognition. Drawing on interviews with senior commanders, policy-makers and representatives of Forces’ charities, this study highlights how the Army deployed the Military Covenant to convey the pressure on the institution caused by the concurrent combat operations in Iraq and Afghanistan. While achieving a better deal for soldiers whose sacrifice became all too apparent, the Military Covenant licensed unprecedented incursion into politics by senior commanders, enabling them to out-manoeuvre the Blair-Brown governments and to challenge the existing norms within Britain’s civil-military relationship. As British Forces prepare to leave Afghanistan, this study considers the value Britain accords to military service and whether civilian society will continue to uphold its Covenant with those who have served the nation.

The Spaces of the Hospital examines how hospitals operated as a complex category of social, urban and architectural space in London from 1680 to 1820. This period witnessed the transformation of the city into a modern metropolis. The hospital was very much part of this process and its spaces, both interior and exterior, help us to understand these changes in terms of spatiality and spatial practices. Exploring the hospital through a series of thematic case studies, Dana Arnold presents a theoretically refined reading of how these institutions both functioned as internal discrete locations and interacted with the metropolis. Examples range from the grand royal military hospital, those concerned with the destitute and the insane and the new cultural phenomenon of the voluntary hospital. This engaging book makes an important contribution to our understanding of urban space and of London, uniquely examining how different theoretical paradigms reveal parallel readings of these remarkable hospital buildings.

The British soldier was a fascinating and complex figure in the century between the Hanoverian accession and the Battle of Waterloo. The 'war and society' approach has shed much light on Britain's frequent experience of conflict in this period, but Britain's Soldiers argues that it is time to refocus our attention on the humble redcoat himself, and rethink historical approaches to soldiers' relationship with the society and culture of their day. Using approaches drawn from the histories of the military, gender, art, society, culture and medicine, this volume presents a more rounded picture of the men who served in the various branches of the British armed forces. This period witnessed an unprecedented level of mass mobilisation, yet this was largely achieved through novel forms of military service outside of the regular army. Taking a wide definition of soldiering, this collection examines the part-time and auxiliary forces of the period, as well as looking at the men of the British Army both during their service and once they had been discharged from the army. Chapters here explore the national identity of the soldier, his sense of his rights within systems of military discipline, and his relationships with military hierarchies and honour codes. They also explore the welfare systems available to old and wounded soldiers, and the ways in which soldiers were represented in art and literature. In so doing, this book sheds new light on the processes through which soldiers were 'made' during this crucial period of conflict.