This book explores the epistemology and the methodology of political knowledge and social inquiry: what can we know, and how do we know? Contributing authors offer answers, addressing the purpose and methods of research and analyzing concepts, including the relationship of theory and evidence and the importance of medicine to social science.

This series brings together significant journal articles appearing in the field of comparative politics over the past 30 years. The aim is to render accessible to teachers, researchers and students, an extensive range of essays to provide a basis for understanding the established terrain and new ground. This volume introduces the undergraduate to a significant body of the periodical literature on the subject of national and international security.

"Rhetoric, Media and the Narratives of US Foreign Policy: Making Enemies studies the process of communicating threats to the US public and explores when and why the American public believes another country or regime is a threat. Through a comparative and historical study, the author focuses on how the media environment enables and constrains rhetorical strategies deployed to construct, reproduce, and change narratives about a threat. Recent literature on threat inflation, securitization, and critical security studies returned to the concept of "threat." Building on this renewed conceptual attention, this book examines why and how policy makers and other public figures, in particular the President, convince the public about a threat and will be of interest to students and academics in the disciplines of political science, international relations, foreign policy, security studies and contemporary history. Adam Lusk is an Associate Professor of Political Science at Rosemont College, USA. He teaches courses in International Relations and Comparative Politics, as well as First Year Connections Seminar. His research interests include international security, threat perception, global environmental politics, and norms and ethics in International Relations"--

Domínguez has drawn together fifteen leading scholars on international relations and comparative politics from Latin America, the Caribbean, and the United States, thus bringing to bear varying national perspectives from several corners of the hemisphere to analyze the intersection between regional security issues and the democracy building process in Latin America.

Hybrid threats posed by various combinations of state and non-state actors have presented considerable transnational challenges to EU-members and NATO-allies. This ongoing rise of hybrid threats, ranging from political instability in Eastern Europe and the Middle East to the resulting mass refugee influx and terrorism in the European neighborhood, stress the need to timely discuss important questions about hybrid threats and the venues for effective Euro-Atlantic cooperation, including post-Brexit policy implications. This edited volume presents comprehensive analyses from various experts on these interrelated issues, and, thus, represents an essential source for scholars and practitioners of European politics and international relations with an interest in contemporary transnational security issues. In addition, this book will be useful as up-to-date coursework material for courses on European security and foreign policy, international security and strategic studies, unconventional warfare, and transatlantic relations. 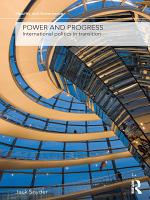 Jack Snyder is a leading American international relations scholar with an international reputation for his research on IR theory and US Foreign policy. This book collects many of his most important essays into a single volume. Exploring a liberal realist theory of international politics, the book is arranged around three key subject areas: Anarchy and Its Effects The Challenges of Democratic Consolidation Empire and the Promotion of a Liberal Order With a new introduction to frame the selected essays, this collection examines how developing nations evolve political systems, and fit into a world dominated by liberal-democracies. It looks to the future for the current dominant powers in a changing world of international relations and at the challenges to their leadership. Featuring a new conclusion, developed from the assembled chapters, this is a fascinating and vital collection of scholarship from one of the most influential theorists of his generation. Power and Progress is an invaluable text for students and scholars of international relations, and those interested in the debates on liberalism and realism, and comparative politics.

South Korea's phenomenal rise has been studied extensively by political scientists and economists both in terms of its impact on democratisation and as a role model for economic development. Yet little attention has been devoted to exploring the nexus between economic development and foreign policy. In South Korea's Rise, Uk Heo and Terence Roehrig propose a new theoretical framework to illustrate how an increase in a country's economic prosperity can bring about change to its foreign policy, prompting greater involvement in the international system, the transition to democracy, an expanded set of interests and increased tools to pursue its foreign policy goals. As a rising middle power, analysis of South Korea's foreign policy is crucial to our understanding of the power structure and future relations in East Asia. This is essential reading for all students and scholars with an interest in Asia, foreign policy and global economics.

The world is experiencing strategic transition from the short-lived Post-Cold War unipolar system to a new and complex configuration of international relations. In the fast-changing global scenario, the importance of South Asia has come to be felt more than ever before, and across the world. South Asia, which consists of 8 states and more than one-fifth of humanity, has emerged as a vital region to the emerging global order due to its geo-strategic significance, growing economic dynamism, fragile state structures and crisis in governance. This book contains 16 research articles which provide deep insights into the complex and multi-faceted nature of South Asia in the globalised world. These have been authored by scholars representing the disciplines of international relations, comparative politics, economics, security studies, and political economy. To understand the new realities of South Asia, the book would prove useful for researchers, policy makers, strategic analysts and others interested in world politics and international relations.

In this book, Alex Battler questions the assertion of Russia’s status as a great power in the acuminate form. The author reveals the contradictions between Russia’s real modern potential and its foreign policy objectives formulated by official Moscow. The author has formulated laws on the Pole, the Center of Power, and Force. Battler introduces some new concepts of the Theory of International Relations: The Foreign Policy Potential of the State and The Law on the Optimal Balance Between the Costs of Domestic and Foreign Policy. On almost all problems raised by the author, his views do not coincide with generally accepted interpretations and approaches. The second extended edition of the book “The Twenty-First Century: The World Without Russia” includes updated copyright and newly added parts and paragraphs.

Phillip Y. Lipscy explains how countries renegotiate international institutions when rising powers such as Japan and China challenge the existing order. This book is particularly relevant for those interested in topics such as international organizations, such as United Nations, IMF, and World Bank, political economy, international security, US diplomacy, Chinese diplomacy, and Japanese diplomacy.

This book challenges the conventional security-based international policy frameworks that have developed for dealing with HIV/AIDS during and after conflicts, and examines first-hand evidence and experiences of conflict and HIV/AIDS. Since the turn of the century international policy agenda on security have focused on HIV/AIDS only as a concern for national and international security, ignoring people's particular experiences, vulnerabilities and needs in conflict and post-conflict contexts. Developing a gender-based framework for HIV/AIDS-conflict analysis, this book draws on research conducted in Burundi to understand the implications of post-conflict demobilization and reintegration policies on women and men and their vulnerability to HIV/AIDS. By centring the argument on personal reflections, this work provides a critical alternative method to engage with conflict and HIV/AIDS, and a much richer understanding of the relationship between the two. International Security, Conflict and Gender will be of interest to students and scholars of healthcare politics, security and governance.

Issues of defence politics and policy have long been at the forefront of political agendas and defining of international affairs. However, the dramatic changes to the global system that have taken place since the end of the Cold War and parrticularly since the terror attacks on the USA on 11 September 2001 have amplified the world's attention toward political and policy issues of national, regional and global security. The focus of this volume is on examining the fundamental causes of, and defence policy responses to this new 'post-9/11' security environment. Edited by Isaiah (Ike) Wilson III and James J. F. Forest of the US Military Academy, West Point, USA, this volume is international in scope, with pieces written by experts in the field, offering a collection of up-to-date and balanced insights on key contemporary issues of concern to defence policymakers. The book will be an invaluable reference tool for academics and students, researchers in international relations, policymakers, media professionals and government officials.