Although a great deal has been published on the economic, social and engineering history of nineteenth-century railways, the work of historical geographers has been much less conspicuous. This overview by David Turnock goes a long way towards restoring the balance. It details every important aspect of the railway’s influence on spatial distribution of economic and social change, providing a full account of the nineteenth-century geography of the British Isles seen in the context of the railway. The book reviews and explains the shape of the developing railway network, beginning with the pre-steam railways and connections between existing road and water communications and the new rail lines. The author also discusses the impact of the railways on the patterns of industrial, urban and rural change throughout the century. Throughout, the historical geography of Ireland is treated in equal detail to that of Great Britain.

A fascinating journey through the history of railways From the early steam trains to the high-speed bullet trains of today, The Iron Road tells the hidden stories of railway history- the inspired engineering, blood, sweat and tears that went into the construction of the railways. Uncover the compelling tales of bold vision, invention and error, and social change behind the history of trains and railways, with famous railways such as the Transsiberian fully explored. Learn how the great railway pioneers such as George Stephenson produced the ideas and feats of engineering that created the railways and changed the world. Each exciting moment of railway history is captured, contextualised and enhanced by superb illustrations. Trains and railways of the past like the romantic Orient Express are brought to life through amazing eyewitness accounts, allowing you to see the railways through the eyes of people who were there at the time. Written by Christian Wolmar, an award-winning writer and broadcaster, The Iron Road is an exciting trip through the history of trains for any railway enthusiast.

This is a business history of the first twenty-five years of nationalised railways in Britain. Commissioned by the British Railways Board and based on the Board's extensive archives, it breaks new ground in analysing fully the dynamics of nationalised industry management and, in particular, the complexities of the vital relationship with government. After exploring the origins of nationalisation, the book deals with the organisation, financial performance, investment and commercial policies of the British Transport Commission (1948-2), Railway Executive (1948-53) and British Railways Board (1963-73). The special problems of the railway industry, unique in its complexity, are fully explored, and new calculations of profit and loss, investment, and productivity are provided on a consistent basis for 1948-73. This business history thus represents a major contribution not only to the debate about the role of the railways in a modem economy but also to that concerning the nationalised industries, which have proved to be one of the most enduring problems of the British economy since the War.

The opening of the pioneering Liverpool and Manchester Railway in 1830 marked the beginning of the railways' vital role in changing the face of Britain. Fire and Steam celebrates the vision and determination of the ambitious Victorian pioneers who developed this revolutionary transport system and the navvies who cut through the land to enable a country-wide network to emerge. From the early days of steam to electrification, via the railways' magnificent contribution in two world wars, the chequered history of British Rail, and the buoyant future of the train, Fire and Steam examines the social and economical importance of the railway and how it helped to form the Britain of today.

These papers seek to address the question of what should be the future concerns of railway historians through the consideration of a number of themes of significance in railway history. While recognizing the need to revisit old areas of study, these papers seek to indicate new perspectives which might be opened up. They are firmly rooted in the realities of railway history with its strong and continuing appeal for both amateur and professional. Some of the material is as relevant for the privatized railways of the present as the well-loved railways of the past.

The Iron Road is full of wondrous curiosities. Did you know that early trains in Australia were pulled by convicts, or that elephants were until recently used to shunt freight wagons in India? The world's most magnificent railway station, the Chhatrapati Shivaji terminal in Mumbai, took 10 years to build. The longest possible continuous railway journey in the world is the 10,600 miles between Algeciras in Spain and Ho Chi Minh City in Vietnam. And the idea that Mussolini made the trains run on time is a myth. No invention, not even the Internet, has ever transformed the way the world traveled, worked, thought, fought, ate, drank, made love--you name it--the way the train did. From the historic moment in September 1830 when the first train chuffed between Liverpool and Manchester, UK, there was a race to lay down tracks across the planet. Adventurers, visionaries, and rogues were attracted to grandiose projects linking distant corners of the globe in a quest for wealth, power, and national unity. The achievements were heroic: India's railway network was the biggest public works project since the building of the pyramids. But the human costs were huge. In the 1850s, six thousand workers died during the construction of the Panama railway, the world's first transcontinental line--120 for each mile of railroad. The cadavers were pickled and sold to medical schools around the world to defray costs. But for the shareholders, there were fortunes to be made, and at their peak, the railroads represented luxury almost beyond belief. The Iron Road tells of great invention, grand vision, mind-boggling engineering, military strategy, colonial ambition, groundbreaking trade changes, and social impact--all the ways that railroads utterly changed the world in which we live.

A standard track gauge—the distance between the two rails—enables connecting railway lines to exchange traffic. But despite the benefits of standardization, early North American railways used six different gauges extensively, and even today breaks of gauge at national borders and within such countries as India and Australia are expensive burdens on commerce. In Tracks across Continents, Paths through History, Douglas J. Puffert offers a global history of railway track gauge, examining early choices and the dynamic process of diversity and standardization that resulted. Drawing on the economic theory of path dependence, and grounded in economic, technical, and institutional realities, this innovative volume traces how early historical events, and even idiosyncratic personalities, have affected choices of gauge ever since, despite changing technology and understandings of what gauge is optimal. Puffert also uses this history to develop new insights in the theory of path dependence. Tracks across Continents, Paths through History will be essential reading for anyone interested in how history and economics inform each other. 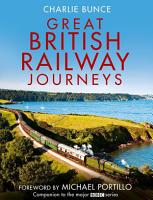 The Sunday Times Bestseller A glorious insight into Britain over the last 150 years - its history, landscape and people - from the window of Britain’s many and magnificent railway journeys.

The Round Table looks at how the European railway landscape is being reshaped. In doing so, it presents lessons which stand to benefit transport policy throughout Europe.

This is a comprehensive account of a decisive epoch in England's economic development by a leading economic historian. 'Works of economic history often get bogged dwon in figures - so many machines, so much unemployment, often, too, they are histories of technology, not of economic organization. Professor Ashworth goes to the opposite extreme in a most praiseworthy way: his book is actually good to read. Though there are tables of statistics (eleven of them), the book is an essay in interpretation, not an encyclopedia; it enriches our understanding rather than adding to our knowledge.' A.J.P. Taylor. This classic book was first published in 1960.

Explore a highly illustrated and comprehensive look at the story of 400 years of Britain's railways.

A fascinating journey through the history of railways, includes first-hand accounts of innovation, triumph, and tragedy. From the earliest steam engine to the high-speed bullet trains of today, A Short History of the Railway reveals the hidden stories of railway history across the world - the inspired engineering; the blood, sweat, and tears that went into the construction of the tracks; the ground-breaking innovations behind the trains that travelled along them; and the triumphs and tragedies of the people who made the railway what it is. Chart the history of the Trans-Siberian railway, the Orient Express, and Maglev trains and the impact of world events on the development of trains and the railway. Explore the pioneering railway lines that crossed continents, the key trains of each era, and the locomotives that changed the world. A riveting narrative packed with photographs, diagrams, and maps to illustrate and illuminate, this is the biography of the machines that carried us into the modern era.