One of the lesser-known historical crimes that wiped out millions of people was Holodomor (loosely translated from Ukrainian as "death by hunger"), the famine and genocide that occurred during Soviet rule between 1932 and 1933. This book relates the shocking story of how a natural disaster was weaponized by the Soviet Union under the rule of Joseph Stalin to punish a whole people. Evocative photographs with compelling background and analysis give readers the story of a tragic chapter of European history in the twentieth century, while tying the event to our all-too-relevant modern context. 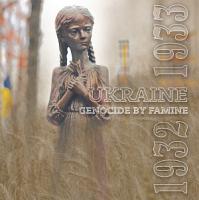 The word Holodomor means the deliberate mass murder by famine from which there is no salvation. Ukrainians use this name when referring to the National Catastrophe of 1932 – 33. We begin with the fact that the Holodomor was one of the most important events not only in Ukraine’s history, but also in 20th century world history. Without understanding this, it is difficult to grasp the nature of totalitarianism and the crimes committed by both the Soviet and Nazi totalitarian regimes. The prehistory of the Holodomor and its effects, as this exhibit shows, cover nearly a century. One starts with exam­ining what Ukraine was like at the beginning of the 20th century some 30 years prior to this tragedy and ends with the discussion of the rebirth of memory of the Holodomor in present day Ukraine.