A shared interest of law and religion is the advancement of human flourishing, yet there is no common understanding of what it means for humans to flourish and the means by which to attain a flourishing life. The concept of human flourishing is especially important for Africa, where community and national development compete with forces of conflict and scarce resources. In the broadest sense, the concept of human flourishing focuses our attention on having a comprehensively good or worthwhile life, but various religious and legal traditions suggest different norms for measuring the quality of life and designing the institutional structures that could best facilitate and preserve it.

More than almost anything else, globalization and the great world religions are shaping our lives, affecting everything from the public policies of political leaders and the economic decisions of industry bosses and employees, to university curricula, all the way to the inner longings of our hearts. Integral to both globalization and religions are compelling, overlapping, and sometimes competing visions of what it means to live well. In this perceptive, deeply personal, and beautifully written book, a leading theologian sheds light on how religions and globalization have historically interacted and argues for what their relationship ought to be. Recounting how these twinned forces have intersected in his own life, he shows how world religions, despite their malfunctions, remain one of our most potent sources of moral motivation and contain within them profoundly evocative accounts of human flourishing. Globalization should be judged by how well it serves us for living out our authentic humanity as envisioned within these traditions. Through renewal and reform, religions might, in turn, shape globalization so that can be about more than bread alone.

A shared interest of law and religion is the advancement of human flourishing, yet there is no common understanding of what it means for humans to flourish and the means by which to attain a flourishing life. The concept of human flourishing is especially important for Africa, where community and national development compete with forces of conflict and scarce resources. In the broadest sense, the concept of human flourishing focuses our attention on having a comprehensively good or worthwhile life, but various religious and legal traditions suggest different norms for measuring the quality of life and designing the institutional structures that could best facilitate and preserve it.

The philosophy of religion, once considered a deviation from an otherwise analytically rigorous discipline, has flourished over the past two decades. This collection of new essays by twelve distinguished philosophers of religion explores three broad themes: religious attitudes of belief, acceptance, and love; human and divine freedom; and the rationality of religious belief. 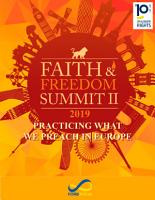 The European Parliament in Brussels was a welcoming venue, on the 2th of April 2019, the Faith and Freedom Summit II. For the second year in a row the Faith & Freedom Summit met on April 2 in the European Parliament, to forge the way forward with concerned European politicians, administrators, NGOs and individuals to ensure that the key fundamental human right of freedom of religion or belief is not left behind and reduced to a second-tier right. The Faith and Freedom Summit is a coalition of 20 NGOs which have come together to promote religious tolerance, particularly within the European Union. It is a non-partisan initiative which gathers high-level thought-leaders to highlight where religious freedom is hindered in European Union today, to assess areas that need to be improved as regards the protection of freedom of religion or belief, and to be a force of proposal to outline policies toward a greater respect of religious diversity in Europe. Attending and speaking in support of the initiative were: - Kishan Manocha, Senior Advisor on Freedom of Religion and Belief, OSCE. - Archbishop Thomas Schirrmacher, President of the International Society for Human Rights. - Bashy Quraichy, Secretary General of the European Muslim Initiative for Social Cohesion. - Martin Weightman, Director of the All Faiths Network. - Hans Noot, the President of the Netherlands-based NGO the Gerard Noot Foundation. - Mr. Eric Roux, Vice-President of the European Office of the Church of Scientology for Public Affairs and Human Rights - Kristina Arriaga de Bucholz (President - Oxford Society of Law and Religion and Commissioner of the US Commission on International Religious Freedom) - Willy Fautre (Director - Human Rights Without Frontiers International) - Massimo Introvigne (Director of CESNUR) - Ms. Ines Mazarrasa (Directora Fundacion Pluralismo y Convivencia, Foundation Pluralism and Coexistence) Laurentiu Rebega MEP - Alfiaz Vaiya (Coordinator - European Parliament Anti-Racism and Diversity Intergroup) - Marco Ventura (Professor of Law, University of Siena) - Jan Zahradil MEP (President of ACRE) The meeting ended with attendees agreeing to work on all proposed initiatives and meet on a regular basis to implement them.

Freedom is vital both to Karl Barth’s theology and to modern religion, politics, and culture. Leigh describes how Barth’s lifelong fascination by freedom culminated in a fresh, daring engagement with it in his last completed book, volume IV/3 of the massive Church Dogmatics—which is probably the most important work of Christian theology in the twentieth century. That volume builds on Barth’s earlier work but also goes beyond it in ways that have not yet been appreciated. Leigh shows how this mature theology of Barth not only responds profoundly to key questions about freedom, both in philosophy and theology, but also opens up a rich, habitable understanding of Jesus Christ, and of life in relationship with him, that is prophetic for the twenty-first century. This involves a dynamic integration of knowing with being, being with action, truth with witness, individual with community, and divine initiative with human flourishing. At the heart of this life with God is participation in the asymmetrical yet utterly reciprocal interaction between human beings and the God who loves them in freedom. Leigh succeeds both in describing this participation convincingly and in demonstrating its provocative attractiveness. 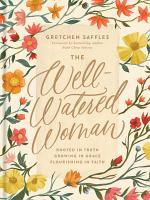 Discover the bottomless, refreshing Well of God's Word--and experience a fullness and peace beyond your circumstances. In the chaos of our everyday, it can be difficult to live out and apply the truths of Scripture. We want more of Jesus, but we find ourselves looking to our own lives and accomplishments for our worth and identity. And while that may buoy us for a time, we're often left feeling dried up, discouraged, and longing for more. Gretchen Saffles knows what it's like to feel overwhelmed and unable to flourish. In The Well-Watered Woman, Gretchen leads us to the Well of fullness, the Word of freedom, and the Way of fruitfulness. She teaches that God's Word will satisfy us for all eternity. Using Scripture and her own personal story of surrender, Gretchen offers spiritually hungry women tangible tools to not only know Jesus more but to live a life that thoroughly enjoys Him, seeks Him, and follows Him into freedom.

Science and Faith Can—and Do—Support Each Other Science and Christianity are often presented as opposites, when in fact the order of the universe and the complexity of life powerfully testify to intelligent design. With this comprehensive resource that includes the latest research, you’ll witness how the findings of scientists provide compelling reasons to acknowledge the mind and presence of a creator. Featuring more than 45 entries by top-caliber experts, you’ll better understand… how scientific concepts like intelligent design are supported by evidence the scientific findings that support the history and accounts found in the Bible the biases that lead to scientific information being presented as a challenge—rather than a complement—to Christianity Whether you’re looking for answers to your own questions or seeking to explain the case for intelligent design to others, The Comprehensive Guide to Science and Faith is an invaluable apologetic tool that will help you explore and analyze the relevant facts, research, and theories in light of biblical truth.

Since at least the attacks of September 11, 2001, one of the most pressing political questions of the age has been whether Islam is hostile to religious freedom. Daniel Philpott examines conditions on the ground in forty-seven Muslim-majority countries today and offers an honest, clear-eyed answer to this urgent question. It is not, however, a simple answer. From a satellite view, the Muslim world looks unfree. But, Philpott shows, the truth is much more complex. Some one-fourth of Muslim-majority countries are in fact religiously free. Of the other countries, about forty percent are governed not by Islamists but by a hostile secularism imported from the West, while the other sixty percent are Islamist. The picture that emerges is both honest and hopeful. Yes, most Muslim-majority countries are lacking in religious freedom. But, Philpott argues, the Islamic tradition carries within it "seeds of freedom," and he offers guidance for how to cultivate those seeds in order to expand religious freedom in the Muslim world and the world at large. It is an urgent project. Religious freedom promotes goods like democracy and the advancement of women that are lacking in the Muslim-majority world and reduces ills like civil war, terrorism, and violence. Further, religious freedom is simply a matter of justice--not an exclusively Western value, but rather a universal right rooted in human nature. Its realization is critical to the aspirations of religious minorities and dissenters in Muslim countries, to Muslims living in non-Muslim countries or under secular dictatorships, and to relations between the West and the Muslim world. In this thoughtful book, Philpott seeks to establish a constructive middle ground in a fiery and long-lasting debate over Islam.

Authority is something we experience every day, but is it necessary? Many think that it is not, and that it exists only as a remedy for some defect in us. Victor Lee Austin sets about exploring the higher and nobler functions of authority, and in doing so reveals its human importance as more than simply a provision for human inadequacies. A significant contribution to Christian anthropology, the book illuminates an indispensable feature of human sociality: the need for, and the good provided by, authority. In enabling us to do more complex activities, to gain and communicate understanding of the world around us and to flourish in political communities, authority ultimately leads us to enjoy God. Victor Lee Austin makes a unique contribution to political theology by deliberating the ways that authority functions both socially and epistemologically. The field of ecclesiology is also enriched by the book's discussion of authority as at once necessary and fallible. Those interested in the work of Michael Polanyi, Yves Simon, or Oliver O'Donovan will find these authors brought into the broader conversation about authority in an engaging way.

A fresh vision of the common good through pnumatological lenses Daniela C. Augustine, a brilliant emerging scholar, offers a theological ethic for the common good. Augustine develops a public theology from a theological vision of creation as the household of the Triune God, bearing the image of God in a mutual sharing of divine love and justice, and as a sacrament of the divine presence. The Spirit and the Common Good expounds upon the application of this vision not only within the life of the church but also to the realm of politics, economics, and care for creation. The church serves a priestly and prophetic function for society, indeed for all of creation. This renewed vision becomes the foundation for constructing a theological ethic of planetary flourishing in and through commitment to a sustainable communal praxis of a shared future with the other and the different. While emphatically theological in its approach, The Spirit and the Common Good engages readers with insights from political philosophy, sociology of religion, economics, and ecology, as well as forgiveness/reconciliation and peacebuilding studies.