This volume is concerned with the analysis and interpretation of multivariate measurements commonly found in the mineral and metallurgical industries, with the emphasis on the use of neural networks. The book is primarily aimed at the practicing metallurgist or process engineer, and a considerable part of it is of necessity devoted to the basic theory which is introduced as briefly as possible within the large scope of the field. Also, although the book focuses on neural networks, they cannot be divorced from their statistical framework and this is discussed in length. The book is therefore a blend of basic theory and some of the most recent advances in the practical application of neural networks.

This unique text/reference describes in detail the latest advances in unsupervised process monitoring and fault diagnosis with machine learning methods. Abundant case studies throughout the text demonstrate the efficacy of each method in real-world settings. The broad coverage examines such cutting-edge topics as the use of information theory to enhance unsupervised learning in tree-based methods, the extension of kernel methods to multiple kernel learning for feature extraction from data, and the incremental training of multilayer perceptrons to construct deep architectures for enhanced data projections. Topics and features: discusses machine learning frameworks based on artificial neural networks, statistical learning theory and kernel-based methods, and tree-based methods; examines the application of machine learning to steady state and dynamic operations, with a focus on unsupervised learning; describes the use of spectral methods in process fault diagnosis.

This volume composes the proceedings of the Second International Conference on Computational Collective Intelligence––Technologies and Applications (ICCCI 2010), which was hosted by National Kaohsiung University of Applied Sciences and Wroclaw University of Technology, and was held in Kaohsiung City on November 10-12, 2010. ICCCI 2010 was technically co-sponsored by Shenzhen Graduate School of Harbin Institute of Technology, the Tainan Chapter of the IEEE Signal Processing Society, the Taiwan Association for Web Intelligence Consortium and the Taiwanese Association for Consumer Electronics. It aimed to bring together researchers, engineers and po- cymakers to discuss the related techniques, to exchange research ideas, and to make friends. ICCCI 2010 focused on the following themes: • Agent Theory and Application • Cognitive Modeling of Agent Systems • Computational Collective Intelligence • Computer Vision • Computational Intelligence • Hybrid Systems • Intelligent Image Processing • Information Hiding • Machine Learning • Social Networks • Web Intelligence and Interaction Around 500 papers were submitted to ICCCI 2010 and each paper was reviewed by at least two referees. The referees were from universities and industrial organizations. 155 papers were accepted for the final technical program. Four plenary talks were kindly offered by: Gary G. Yen (Oklahoma State University, USA), on “Population Control in Evolutionary Multi-objective Optimization Algorithm,” Chin-Chen Chang (Feng Chia University, Taiwan), on “Applying De-clustering Concept to Information Hiding,” Qinyu Zhang (Harbin Institute of Technology, China), on “Cognitive Radio Networks and Its Applications,” and Lakhmi C. 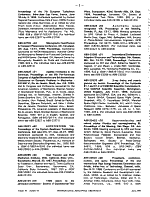 Monthly. Papers presented at recent meeting held all over the world by scientific, technical, engineering and medical groups. Sources are meeting programs and abstract publications, as well as questionnaires. Arranged under 17 subject sections, 7 of direct interest to the life scientist. Full programs of meetings listed under sections. Entry gives citation number, paper title, name, mailing address, and any ordering number assigned. Quarterly and annual indexes to subjects, authors, and programs (not available in monthly issues). 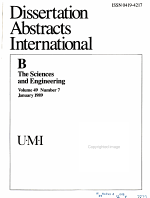