A guide to the practice of Chan Buddhism by today's most prominent master of that tradition - with 180 of his gemlike sayings and aphorisms that serve as inspirations to spiritual practice.

Here is an ideal guide to the practice of Chan Buddhism by a great modern teacher. Part One presents Master Sheng Yen’s lively, anecdotal account of the history and main principles of the Chan tradition, along with his careful instructions for meditation. Part Two consists of 180 of his gemlike aphorisms and sayings that serve as inspirations to spiritual practice. The book will appeal to beginners as well as experienced students.

"Madsen is a genial and well-informed guide, both to social-political change in Taiwan and to the ins and outs of religious movements. His engaging writing skillfully interweaves profound insights and themes into the descriptive analytical narrative. Democracy's Dharma presents new material based on recent research while offering a fresh spin on thinking about Asian religions."—Thomas Gold, editor of Social Connections in China: Institutions, Culture, and the Changing Nature of Guanxi

Adds new voices to the feminist conversation and brings a rich variety of diverse approaches to Buddhist womens identities, the feminine, and Buddhist feminism. This groundbreaking book explores Buddhist thought and culture, from multiple Buddhist perspectives, as sources for feminist reflection and social action. Too often, when writers apply terms such as woman, femininity, and feminism to Buddhist texts and contexts, they begin with models of feminist thinking that foreground questions and concerns arising from Western experience. This oversight has led to many facile assumptions, denials, and oversimplifications that ignore womens diverse social and historical contexts. But now, with the tools of feminist analysis that have developed in recent decades, constructs of the feminine in Buddhist texts, imagery, and philosophy can be examinedwith the acknowledgment that there are limitations to applying these theoretical paradigms to other cultures. Contributors to this volume offer a feminist analysis, which integrates gender theory and Buddhist perspectives, to Buddhist texts and womens narratives from Asia. How do Buddhist concepts of self and no-self intersect with concepts of gender identity, especially for women? How are the female body, sexuality, and femininity constructed (and contested) in diverse Buddhist contexts? How might power and gender identity be perceived differently through a Buddhist lens? By exploring feminist approaches and representations of the feminine, including persistent questions about womens identities as householders and renunciants, this book helps us to understand how Buddhist influences on attitudes toward women, and how feminist thinking from other parts of the world, can inform and enlarge contemporary discussions of feminism.

This book is the first socio-intellectual history of the Dharma Drum Lineage of Chan (Zen), a new lineage of Buddhism founded by the late Chinese Buddhist cleric, Sheng Yen (1931–2009)—arguably one of the most influential Chan masters in contemporary times. The book challenges the received academic and popular image of Chan Buddhism as a meditation school that bypasses scriptural learning. Using Sheng Yen’s doctrinal classification (Chn. panjiao) chart as an example, the book shows Sheng Yen’s Chan as a synthesis of both Indian and Chinese premodern forms of Buddhism, and as the summum bonum of Han transmission of Chinese Buddhism (Chn. Hanchuan fojiao). The book demonstrates how Sheng Yen’s presentation of Chan was intimately related to the volatile social and political realities of his life—the Communist takeover of China and the subsequent industrial boom that impacted Taiwanese society. In short, this book presents a historically and culturally embodied approach to the formation of Buddhist doctrine and practice. Drawing on the works of postcolonial theories that integrate the role of the researcher into the research, the book also offers a more integrated approach between emic and etic, insider and outsider perspectives to research. Advancing the field of Buddhist studies, the book will be of interest to scholars of Buddhism in the modern period, twentieth-century religious history of China and Taiwan, Chan/Zen studies, World Religions, Asian civilizations, and Modern Biographies. 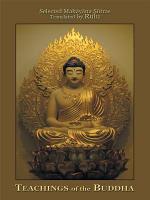 The sixteen sutras in this book are English translations of texts selected from the Chinese Buddhist Canon. Thirteen of them have never before been published in book form. The translators introduction to Buddhist doctrine provides an organized background for readers at all levels to better understand and appreciate the teachings in these sutras, which cover a wide range of interesting topics. For example, in Sutra 1, the Buddha teaches karmic requitals and how one can avoid or mitigate unfortunate requitals. In Sutra 6, He predicts that long after His Dharma has perished, the next Buddha, Maitreya, will bring the Dharma back to this world. In Sutra 13, the Buddha reveals the mystery of consciousness, giving a detailed description of ones rebirth according to karmic force. In Sutra 14, He declares the eternity of nirvana and ones Buddha nature. In Sutra 16, He affirms that ones great compassion for all sentient beings will quickly lead one to Buddhahood. These English translations are easy to read, and Buddhist terms are explained in the glossary. One can read this book for pleasure, or study it for spiritual development. One can also recite the sutras, prayers, and mantras as a spiritual practice. Students in Buddhist Studies certainly can use this book to support and enhance their learning.

An important new book unlocking the words of the Buddha contained in the vast Tibetan canon, one of the main scriptural resources of Buddhism. In the forty-five years the Buddha spent traversing northern India, he shared his wisdom with everyone from beggar women to kings. Hundreds of his discourses, or sutras, were preserved by his followers, first orally and later in written form. Around thirteen hundred years after the Buddha’s enlightenment, the sutras were translated into the Tibetan language, where they have been preserved ever since. To date, only a fraction of these have been made available in English. Questioning the Buddha brings the reader directly into the literary treasure of the Tibetan canon with thoroughly annotated translations of twenty-five different sutras. Often these texts, many translated here in full for the first time, begin with an encounter in which someone poses a question to the Buddha. Peter Skilling, an authority on early Buddhist epigraphy, archaeology, and textual traditions, has been immersed in the Buddhist scriptures of diverse traditions for nearly half a century. In this volume, he draws on his deep and extensive research to render these ancient teachings in a fresh and precise language. His introduction is a fascinating history of the Buddhist sutras, including the transition from oral to written form, the rise of Mahayana literature, the transmission to Tibet, the development of canons, and a look at some of the pioneers of sutra study in the West.

Analayo offers an inspiring biography of the Buddha, focusing on his meditative development and practice, including extracts from the early discourses, with commentary by the author. He conveys not only a focus on the Buddha as a meditator, but also that the book's readers are meditators, that this is a life of the Buddha providing inspiration and guidance for meditators. Each of the twenty-four chapters concludes with suggestions for meditative practice or conduct.