"Ancient Empires is a relatively brief yet comprehensive and even-handed overview of the ancient Near East, the Mediterranean, and Europe, including the Greco-Roman world, Late Antiquity, and the early Muslin period. The book emphasizes the central, if problematic, connection between political and ideological power in both empire-formation and resistance. By defining the ancient world as a period strectching from the Bronze Age into the early Muslim world, it is broader in scope than competing books; yet at the same time its tight thematic concentration keeps the narrative engagingly focused"--

The world's first known empires took shape in Mesopotamia between the eastern shores of the Mediterranean Sea and the Persian Gulf, beginning around 2350 BCE. The next 2,500 years witnessed sustained imperial growth, bringing a growing share of humanity under the control of ever-fewer states. Two thousand years ago, just four major powers--the Roman, Parthian, Kushan, and Han empires--ruled perhaps two-thirds of the earth's entire population. Yet despite empires' prominence in the early history of civilization, there have been surprisingly few attempts to study the dynamics of ancient empires in the western Old World comparatively. Such grand comparisons were popular in the eighteenth century, but scholars then had only Greek and Latin literature and the Hebrew Bible as evidence, and necessarily framed the problem in different, more limited, terms. Near Eastern texts, and knowledge of their languages, only appeared in large amounts in the later nineteenth century. Neither Karl Marx nor Max Weber could make much use of this material, and not until the 1920s were there enough archaeological data to make syntheses of early European and west Asian history possible. But one consequence of the increase in empirical knowledge was that twentieth-century scholars generally defined the disciplinary and geographical boundaries of their specialties more narrowly than their Enlightenment predecessors had done, shying away from large questions and cross-cultural comparisons. As a result, Greek and Roman empires have largely been studied in isolation from those of the Near East. This volume is designed to address these deficits and encourage dialogue across disciplinary boundaries by examining the fundamental features of the successive and partly overlapping imperial states that dominated much of the Near East and the Mediterranean in the first millennia BCE and CE. A substantial introductory discussion of recent thought on the mechanisms of imperial state formation prefaces the five newly commissioned case studies of the Neo-Assyrian, Achaemenid Persian, Athenian, Roman, and Byzantine empires. A final chapter draws on the findings of evolutionary psychology to improve our understanding of ultimate causation in imperial predation and exploitation in a wide range of historical systems from all over the globe. Contributors include John Haldon, Jack Goldstone, Peter Bedford, Josef Wieseh?fer, Ian Morris, Walter Scheidel, and Keith Hopkins, whose essay on Roman political economy was completed just before his death in 2004. 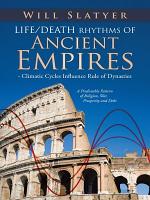 "The Life/Death Rhythms of Ancient Empires" outlines the flow of history from 3000BC to 1400AD to identify the factors that make up dominant, just, prosperous civilisations that can be described as golden cultures. These factors were found to have common features and the cultures themselves could be described in cyclical terms. This meant that the rise and fall of future dominant cultures could be roughly forecast to some degree in terms of hundreds of years. The evolution of capitalism was made possible, during and after actual warfare, by ancient priests and bankers, assisted by the invention of coinage. Capitalism was practised in the ancient world, supported at times by warfare and religion. It was vanquished for centuries by powerful weapons called irresponsible debt, and debasement of currency. The global capitalism of the twenty-first century is dependent on debt and a debased US dollar. A review of ancient history provides the basis for a glimpse into the future. This century's global temperature increase, which so excites environmentalists, can be shown to be part of a thousand year climate cycle. There well might be a human element to global warming but this just exacerbates the centuries' long cyclical pattern. Research has shown that periods of hot-dry and cold-dry climate have effects on human behaviour. Extrapolation of cycles enables forecasts of human behaviour to be made well into the new millennium. Dominant prosperous societies have occurred at roughly 200 year intervals which can suggest time-lines for societies in the present and the future A relatively irreverent history of ancient cultures, war, religion, money and debt produces cyclical analysis enabling a forecast that the USA might lose world dominance in 2040. The next volume "Life/Death Rhythms from the Capitalist Renaissance" will include economic data that will allow refined cyclical forecasts.

The Dynamics of Ancient Empires is designed to address the deficit in the comparative study of ancient empires in the western Old World, and to encourage dialogue across disciplinary boundaries by examining the fundamental features of the successive and partly overlapping imperial states that dominated much of the Near East and the Mediterranean in the first millennia BCE and CE.

Deception offers a broadly accessible overview of state-of-the-art research on lies, trickery, cheating, and shams by leading experts in the natural and social sciences, as well as computing, the humanities, and the military. 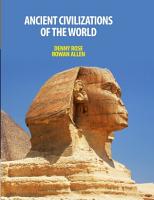 About 5,000 years ago the first urban societies developed laying the foundations for the first civilizations. Nearly all civilizations share the same few features- they have abundant food surpluses, contained cities, political bureaucracies, armies, defined religious and social hierarchies and long distance trading. Ancient Egyptian culture flourished between c. 5500 BCE with the rise of technology (as evidenced in the glass-work of faience) and 30 BCE with the death of Cleopatra VII, the last Ptolemaic ruler of Egypt. It is famous today for the great monuments which celebrated the triumphs of the rulers and honored the gods of the land. The culture is often misunderstood as having been obsessed with death but, had this been so, it is unlikely it would have made the significant impression it did on other ancient cultures such as Greece and Rome. Neolithic means "e;new stone"e;, even though agriculture was the crowning achievement of the period. Civilizations started out small. Agriculture at first tended to tie only small groups together. These groups also all settled along rivers, important as a reliable and predictable source of water. As time passed, families usually worked the same plot of land over successive generations, leading to the concept of ownership. Ancient mortars and grinding tools unearthed in a large mound in the Zagros Mountains of Iran reveal that people were grinding wheat and barley about 11,000 years ago. Grass pea, wild wheat, wild barley, and lentils were found throughout the site, including some of the earliest known samples. This was much further east than most sites known for early agriculture. This book furnishes with utmost facility to all classes of readers, the needed information on ancient civilization. The unusual variety of the subject makes this a work of endless fascination.

Excerpt from Quaint Corner of Ancient Empires: Southern India, Burma, and Manila F making many books there is no end may already be said concerning this Spanish American war, but, so far, no apology is needed for presenting to our public any work upon the Philip pines. If an increase Of the army is demanded for these islands it will not be long before every State in the Union will have men there in whom they are directly interested, and the theatre in which those soldiers must play their parts, and perhaps end their lives, cannot but be Of interest to those left behind them, especially to their wives, mothers, and sisters. Therefore I venture to think that the following ac count Of the city Of Manila with its surroundings will prove acceptable. If it helps the women who wait, and who in so doing fight the hardest Of all battles, to tide over any Of the weary hours, it will have more than accomplished its purpose. About the Publisher Forgotten Books publishes hundreds of thousands of rare and classic books. Find more at www.forgottenbooks.com This book is a reproduction of an important historical work. Forgotten Books uses state-of-the-art technology to digitally reconstruct the work, preserving the original format whilst repairing imperfections present in the aged copy. In rare cases, an imperfection in the original, such as a blemish or missing page, may be replicated in our edition. We do, however, repair the vast majority of imperfections successfully; any imperfections that remain are intentionally left to preserve the state of such historical works.

Informative, fascinating and extremely well-researched...Gordon Kerr's book is a mini masterpiece' - ABC Brisbane Situated at the crossroads of three continents, the Middle East has confounded the ambition of conquerors and peacemakers alike. Christianity, Judaism and Islam all had their genesis in the region but with them came not just civilisation and religion but also some of the great struggles of history. A Short History of the Middle East makes sense of the shifting sands of Middle Eastern History, beginning with the early cultures of the area and moving on to the Roman and Persian Empires; the growth of Christianity; the rise of Islam; the invasions from the east; Genghis Khan's Mongol hordes; the Ottoman Turks and the rise of radicalism in the modern world symbolised by Islamic State. 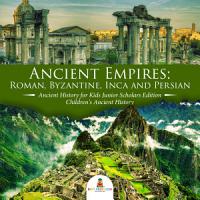 Travel through time and explore the ancient empires of Rome, Byzantine, Inca and Persia. What were the characteristics of these empire that made them unique from the rest? What were their legacies? How did they live and what did they believe in? Questions like these, and more, will be answered in this ebook. Start reading today.

Traces milestones in history from the emergence of Egypt around 3000 B.C. up to the scattering of the Jews in 70 A.D.

Shows why ancient empires based on new age beliefs grew and then died; traces the outbreak of New Age thinking in America and other Western nations.